However, to make a comparable sealed enclosure is considerably more expensive as it will involve larger drivers (need to lower free air resonance) and considerably larger cabinets. If I chose to make a sealed enclosure with the same drivers the low frequency cutoff of the loudspeaker system would be about 50Hz and the box volume of around 50 litres. It is slightly smaller but the cutoff frequency is nearly twice as high. In short, it is a decision of pragmatism to be able to obtain the best performance at the lowest cost that I chose a vented enclosure.

To illustrate that the loudspeaker design does not behave as a “boom box” or a one note bass system and to also demonstrate the transient behaviour of the entire system I conducted some tone burst tests across the entire spectrum. These tone burst tests are as shown below.  The lower trace is the tone burst input and the upper trace the acoustic output.

The 30Hz case represents the worst case scenario for the vented enclosure as the box frequency of the design is 30Hz. Whilst by no means perfect, the carry over in the absence of the excitation is quite well controlled and certainly not strongly resonant. It is 20dB down within a cycle. 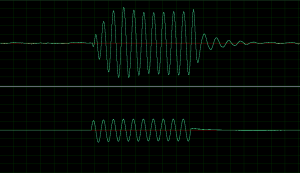 The 60Hz case is similar to the 30Hz case in terms of carry over but for this frequency most of the acoustic output comes from the woofer and not the vent itself. 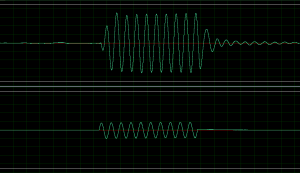 The 100Hz tone burst response is very good and shows very little resonance. The 300Hz and 600Hz responses show a similar response but do exhibit what looks like some degree of cabinet / basket resonance although it is 20dB or more down. Perhaps if I had bothered to internally line the cabinets with some sort of viscous damping material (bitumen for example) these responses may have been better. 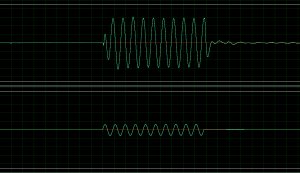 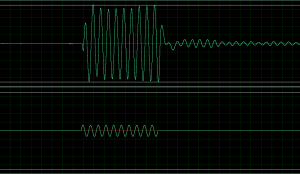 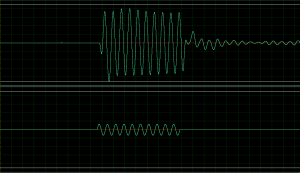 The 1kHz case is perhaps the worst response in the entire set of measurements though it probably isn’t entirely surprising that that is the case. 1KHz is the crossover frequency so the third order cutoff of the crossover will add some ringing and the response could also possibly be confused by having the acoustic output being generated by the tweeter and woofer-mid in equal proportion, as there are two propagation paths for sound to the microphone with possibly different time delays (if I didn’t position the microphone at the exact acoustic middle of the two drivers). It may well be that the majority of the carry over in this case is tied up with output from the woofer-mid, as it is operating outside the piston frequency range for that driver. 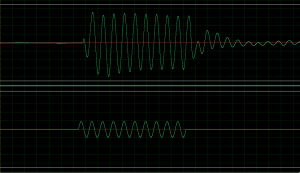 The 3kHz, 6kHz and 10kHz responses are very good and indicate that the tweeter is of high quality. 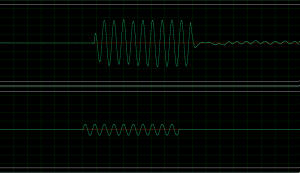 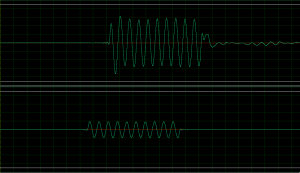 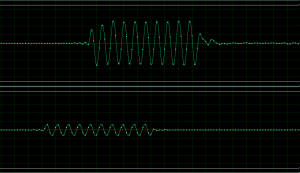 Although a vented enclosure is used the vent is by no means a monotone device or strongly resonant. The low frequency tone burst response below 100Hz whilst not perfect, are in no way bad. I would argue that given the design constraints they are quite good.

The tone burst response in the low – mid range (100Hz, 300Hz and 600Hz) are well controlled but do show some low level structural resonances. The degree to which they are are function of the driver or the cabinet is not know and would take considerable effort to isolate.

The crossover region between the woofer-mid and the tweeter of 1kHz shows the worst tone burst behaviour out of the entire set, though not entirely unexpected. The crossover will add some ringing by virtue of being a 3rd order crossover, but I believe the majority of the carry over is due to modal resonances in the woofer-mid driver cone.

The tone burst responses above 1kHz are all very good indicating that the tweeter has a high quality response.

Although not perfect, taken overall, the responses a pretty good and tally with what I hear when listening to them. I don’t see any significant evidence of the speaker transient response being unduly compromised by the choice of vented enclosure.

Loudspeaker Design Criticism2014-06-102014-06-10/wp-content/uploads/2016/12/harbal-logo-lng_trans-drk-300px.pngHar-Bal | The Scientific Audio Mastering Solution/wp-content/uploads/2016/12/harbal-logo-lng_trans-drk-300px.png200px200px
Why buy Har-Bal?
You can immediately view the problem areas of your stereo files and Har-Balize the corrections. If you are serious about your mixes sounding their best, then Har-Bal should be a standard application used in your studio to test every song before final limiting (loudness) is applied. You can’t go wrong!
FAQ
Har-Bal Introduction
Copyright All Rights Reserved © 2017
Contact Us