As much as I was pleased with my original reference monitor design they suffered from a problem of my own making. Most notably, they had an overly pronounced mid-range at around 1kHz. The source of this anomaly was straight forward enough. Although the modelling of crossover performance with the real drivers was accurate it assumed drivers mounted on an infinite baffle. For the real drivers which are mounted in a cabinet of finite size this is obviously not the case, and as a consequence there is a loss of sensitivity at lower frequencies of around 6dB due to the baffle step phenomena. This also accounts for why I needed 6dB more padding on the tweeter than I originally thought necessary (because the tweeter output is confined to a region in frequency above the baffle step). The reason why the combined system was listenable but not ideal was because the mid-range driver has a natural loss of sensitivity above 500Hz or so of around 3dB so the effective error was only +3dB and not the full +6dB if the infinite baffle response was flat.

The problem of having to completely redesign my crossover because of this error on my part was not a happy feeling. However, when I started to look more closely at what changes were required and how I’d originally implemented the crossover, I suddenly realised that I could easily fix this problem once and for all with minimal changes to the crossover.

If you take a look at the original crossover design as shown below you’ll see that the mid-range has an L-C lattice network (comprising C5,R1,L3,C6,R2,L4) which acts as a phase compensation network to compensate for the phase mismatch arising out of the phase response of the tweeter around its resonant frequency (of 400Hz from memory). R1 and R2 are present in the circuit to compensate for the series resistance in L3 and L4. Without them the phase compensation network would add about 0.5dB at high frequencies. But if these resistors were to be increased in value so they are greater than the series resistance of L3 and L4 then the opposite effect of creating a high frequency cut would occur. It also happens to be the case that the resonant frequency of the phase compensator closely matches the knee frequency for the baffle step compensation. How lucky am I? 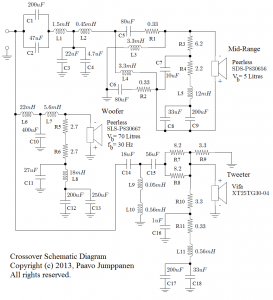 All that is required is to determine what those resistors should be and to add in some further impedance compensation because that added series resistance will then make the impedance the crossover filter actually sees as being inductive instead of the ideal purely resistive one required to get the correct filter response.

I used NGSpice to simulate the crossover response and determine the required resistance to get me the desire 3dB of attenuation above 500Hz for the baffle step compensation. It turned out to be 1.5 Ohms. Then it was just a matter of figuring out a suitable impedance equaliser. For a perfect equaliser I would require an LCR network but I didn’t want the added expense nor did I have the room on the board for another inductor. Instead I used a simple RC network to give a sub-optimal equalisation that is good enough to not unduly affect the crossover performance. Below you will see the modelled impedance that the crossover filter sees looking into the phase compensator with RC impedance equalisation. Although not perfectly resistive it has a nominal impedance of 6.7 Ohms, a maximum of 7.5 Ohms and a minimum of 6.1 Ohms. This degree of variation should have minimal effect on the 3rd order low pass filter response for the mid-range. 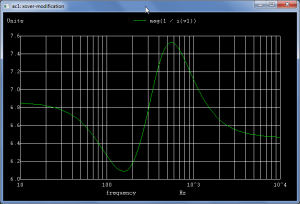 Testing the frequency response at 50cm from the tweeter on axis confirms the reduction in mid-range output. Listening tests also confirm the change as the correct one and I am now 100% satisfied with my monitoring.

The modified crossover design along with the required changes to the mid-range crossover board are shown below. 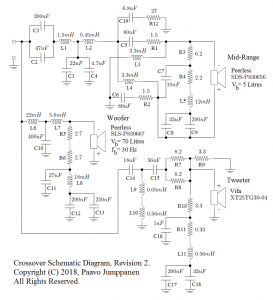 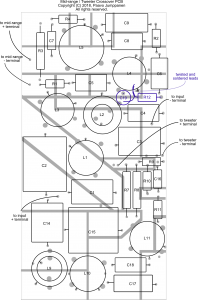 In the next article I will discuss how to evaluate the sonic performance of your listening room, applying the approaches I advocate to my own room.

Loudspeaker Crossover MkII2018-08-042018-08-04/wp-content/uploads/2016/12/harbal-logo-lng_trans-drk-300px.pngHar-Bal | The Scientific Audio Mastering Solution/wp-content/uploads/2016/12/harbal-logo-lng_trans-drk-300px.png200px200px
Why buy Har-Bal?
You can immediately view the problem areas of your stereo files and Har-Balize the corrections. If you are serious about your mixes sounding their best, then Har-Bal should be a standard application used in your studio to test every song before final limiting (loudness) is applied. You can’t go wrong!
FAQ
Har-Bal Introduction
Copyright All Rights Reserved © 2017
Contact Us