One major issue with recording, particularly in the near field, is the issue of large and unwanted transient material. Some of that issue in historical recordings was simply handled by recording to analog tape at a high enough level for tape saturation to largely eliminate it. With digital recording such an approach is not an option and digital saturation is so sharp that it produces deleterious outcomes to the recorded material. Ducking with a gate can produce appropriate outcomes but it is not trivial to set up and tune. Har-Bal Dynamics Processor introduces the process of transient limiting to easily counter these transients and control the degree of transient reduction required. Beyond that Har-Bal Dynamics Processor also offers the ability to do compression and noise gating on the source material.

The processing chain used within Har-Bal Dynamics Processor is shown below. The input signal is first rectified and then passed through the attack low pass filter that serves to smooth out the rectified signal and provide an envelope estimate for the input signal. Because the filter itself has a propagation delay associated with it, a linked delay is included in the signal path to the multiplier so that the envelope and the actual signal are correctly aligned in time. 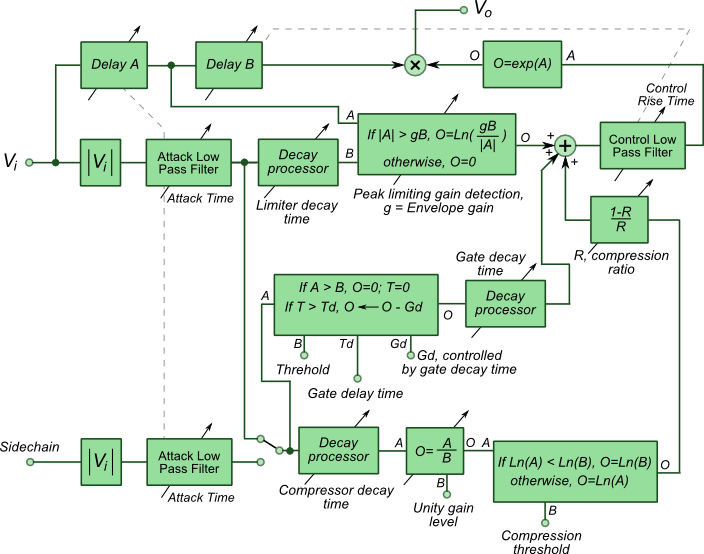 Block Diagram of the Processing Chain in Har-Bal Dynamics Processor

To illustrate the issue of propagation delay consider the figure below that shows a snare drum strike signal applied to the rectifier and attack low pass filter. Whilst the smoothed envelope clearly represents the average magnitude of the rectified signal it is clearly lagging in time.

Output of rectifier and attack filter for a snare strike. Attack time=5ms

With the correct time delay compensation the comparison looks like the following. Here we also show the effect of applying a gain to the envelope signal. It should be obvious that the smoothed envelope forms a good basis for a dynamic limiting threshold and by varying the gain applied to the envelope, you can control the degree to which errant peaks are clamped down upon.

Referring back to the block diagram, the output of the attack filter is then fed to two traditional decay processors (exponential decay in time). One for the transient limiting component and one for the compressor of the system. Envelope gain is only applied to the transient limiter part of the system because it is used to control the degree of transient limiting: the more applied gain the less limiting. The combined effect of decay processing plus envelope gain is illustrated below.

Further into the process of transient limiting we have the logic that decides the required compensation gain to avoid crossing the threshold, of which the output signal will have sharp transitions. Sharp transitions are generally a bad idea as they can lead to obvious artifacts so this control signal output is filtered by the control low pass filter. Again, this filter will introduce a propagation delay into the system which must be taken into account if the corrective gain is to temporally align with the actual signal. This delay is evident in the figure below showing the gain control signal before and after filtering. Note that the signal shown is in log space so a value of 0 corresponds to unity gain and positive values correspond to attenuation. 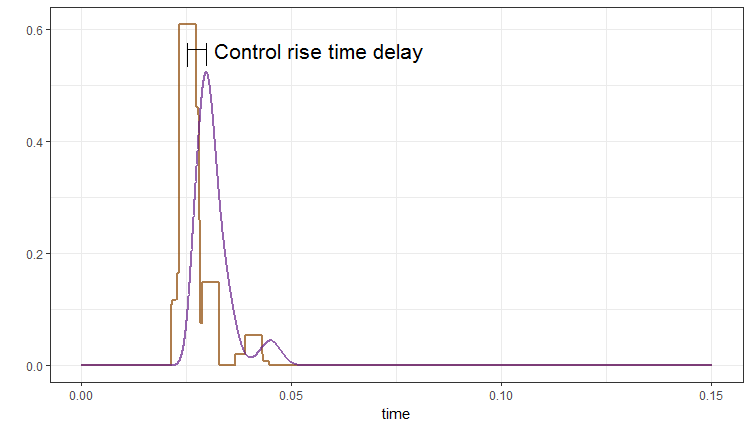 Control signal before and after filtering. Rise time=2ms

When the control signal is finally exponentiated (anti-log) and presented to the input of the final multiplier it aligns in time with the actual signal. This can be seen in the following figure.

Signal and gain control as seen by the multiplier

This process of transient limiting results in the following signal transformation. The very large transients are removed with little to no artefact and the process gives plenty of control to the user as to the degree and character of the limiting thorugh the use of the Attack Time, Rise Time and Envelope Gain controls. Note that there is an overall latency to the process so Har-Bal Dynamics Processor will not be of use in real time monitoring applications, but in the case of post recording mixing and production work the latency is correctly reported and accounted for by the DAW. 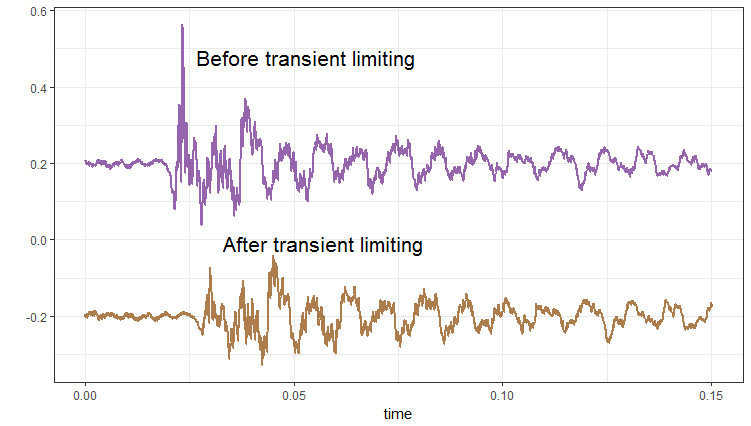 Before and after transient limiting

The compressor section works in a manner similar to tradition single band compressors with the exception that it includes the delay compensation for the rise time component of the envelope detection. As such, compression with this compressor will not result in the creation of compression related transient artifacts, as the envelope signal is in sync with the actual signal being compressed. The typical relationship between compression ratio, unity gain level and threshold for the compressor section is illustrated below. The unity gain level may be an unfamiliar concept but it simply means the input level that corresponds to the compressor having 0dB gain. Think of it as a preservation level so if your pre-processed input averages at -20dB and you wish to preserve that then set the unity gain level to -20dB. If you want the compressed level louder set it to a value greater than the input average and if you want it lower then set it lower than the average. For levels below the unity gain level the compressor will have gain greater than 0dB and for levels above it will be less than 0dB.

Compressor transfer function for compression ratio of 2, unity gain level of -20dB and threshold of -40dB

The noise gate stage is controlled by Delay Time, Decay Time and Threshold parameters. Gating occurs when the input signal is lower than the Threshold for a duration at least as long as Delay Time. If the input level is temporarily lower than Threshold but for a duration less than Delay Time, noise gating will not be triggered. This can be useful in avoiding rapid switching in and out of noise gating but the delay time aspect can also be used for effects such as reproducing a “Phil Collins” like gated drum sound. When gating does occur it takes a finite amount of time to do so and the speed of gating is controlled by the Decay Time parameter. Whether a fast or slow turn off time is required is application specific and will depend upon the desired effect.

A note on Transient Limiting

The transient limiter feature was specifically implemented to address issues with percussive transients but it should be noted that as a side effect, this can also provide a distortion like effect for other instruments such as guitar. With guitar for example, as the envelope gain is decreased from a level of around 10dB down it the minimum you will likely hear a distortion effect reminiscent of clipping creep in. The character of that distortion will be altered by the value you choose for the attack time and the control rise time. In general keep in mind that if you hear this sort of distortion but do not want it then you most likely have an envelope gain level that is too low for the material in question.

Har-Bal Dynamics Processor2020-11-112021-08-30/wp-content/uploads/2016/12/harbal-logo-lng_trans-drk-300px.pngHar-Bal | The Scientific Audio Mastering Solutionhttps://www.har-bal.com/wp-content/uploads/2020/11/dynamicsprocessor_plugin.jpg200px200px
Why buy Har-Bal?
You can immediately view the problem areas of your stereo files and Har-Balize the corrections. If you are serious about your mixes sounding their best, then Har-Bal should be a standard application used in your studio to test every song before final limiting (loudness) is applied. You can’t go wrong!
FAQ
Har-Bal Introduction
Copyright All Rights Reserved © 2017
Contact Us 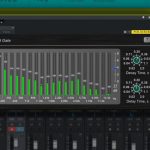