The first thing to do when designing a loudspeaker system is to choose drivers. In the days of limited reporting of technical specifications this could be a hit and miss affair. Thankfully these days the level of performance data available is excellent making the job far easier.

The choice of drivers is influenced by the design goals for the speaker system. With a modest desired bass extension of 50-60Hz it is possible to settle on a two way system and select the woofer and tweeter to meet the goal. If a lower bass extension is required then a three way system is desirable (out of polar response reasoning as mentioned in the previous post). You can certainly make a two way system that extends that low and have a reasonable on axis response, but off axis there is likely to be a substantial weakness at the cross over point.

The lower limit to efficient radiation of sound depends upon the enclosure topology. As a rule of thumb, for a bass reflex (vented) enclosure a lower cutoff of around the free air resonance of the driver can usually be achieved. For a sealed enclosure the limit is more like 1.5-1.7 times the free air resonance. For this reason bass reflex enclosures are an attractive proposition. Certainly to obtain a similar response will a sealed enclosure will usually require a larger driver and a correspondingly larger enclosure. Although many people seem to habour a belief that vented enclosures are somehow compromised I certainly don’t agree and theory and measurement of that topology backs up my views. A well designed will typically outperform a comparable sealed enclosure. The key point is “well designed”. I believe much of the negative sentiment directed toward vented enclosures has its origins in peoples experience with poorly designed vented enclosures.

For tweeters, although the sound power is usually effective down to resonance of the driver, useable output usually only extends to around 2 times the resonant frequency. This limitation stems from power handling considerations. Tweeters have limited linear range in the peak to peak cone displacement so attempting to use the tweeter down to resonance will usually result in a compromised power handling and higher distortion.

My design goals are for a system with a frequency response from 30Hz (or lower) to 20kHz in a modestly sized enclosure (around 70-80 Litres). To achieve this I recognise the need for a 3 way design. To obtain the modest box size I’ll have to limit myself to 8″ woofers. The desire for a low Midrange – tweeter crossover frequency essentially limits the choice of tweeter topology to dome types. With this knowledge in hand then it is just a matter of looking through manufacturer supplied frequency responses and other technical data to see which drivers best fit the task at hand and which you can afford.

When choosing the drivers it is also necessary to pay attention to the driver sensitivities to make sure they are compatible. In my case, because I want to use the Woofer in a sub woofer context (crossing it at a frequency of around 100Hz) it is important that the Woofer and Woofer-Mid units have about the same sensitivity. The tweeter sensitivity should be equal to or greater than the Woofer and Woofer-Mid units (sensitivity here is the resultant sound pressure level for a 2.83Vrms input to the driver terminals).

Which drivers you can realistically choose from will depend on the availability of suppliers. For myself, I was after a local distributor and looked through the catalogue of drivers available from Essential Audio in Melbourne, Australia. I happened to look through basically the entire catalogue and settled upon three different units. For a woofer I chose a Peerless SLS-P830667, for a woofer-mid I chose a Peerless SDS-P830656 and for a tweeter I chose the Vifa XT25TG-30-04. The driver responses are shown below. 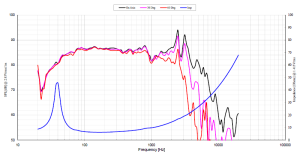 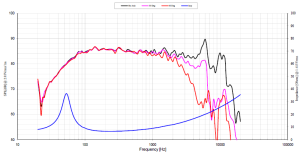 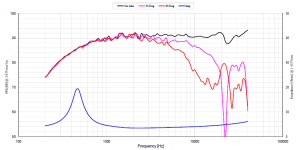 Looking firstly at the tweeter response, you can see that the on axis response is flat to 15kHz with a slight boost up to 20kHz. Off axis the response is well behaved only showing an anomaly at 60 degrees off axis at around 21kHz. Being so high it will probably won’t be noticeable for most listeners.

The woofer-mid response is basically flat to 2kHz (just what we want) and well controlled in the off axis response. the on axis response shows a reasonably strong resonance at 6kHz but it is small enough to not present a problem if using a 3rd order Butterworth crossover.

Compare this with the woofer response which is flat up to around 700Hz and then develops significant issues culminating in a strong resonances at 2.5kHz and 3.0kHz. As a woofer the response is good but this response clearly shows the difficulty in obtaining a 30Hz – 20kHz response in a two way configuration. Any attempt to use this driver in a two way configuration would need substantial response massaging through the crossover to try and compensate for those resonances in the response. The sharpness of those resonances would be very difficult to correct through a passive crossover owing to Q limitations of real inductors (they have significant series resistance which severely limits the maximum Q obtained in any notch filter). In any case, it is unlikely that a satisfactory summing of the tweeter and woofer responses would be possible owing to phasing issues. This would then give rise to a weakness in response at the crossover frequency, which is why I am insistent on a 3 way system.

The driver sensitivities for the woofer and woofer-mid are almost identical at 86dB SPL at 1m with 2.83Vrms input. The tweeter response is about 91dB SPL, meaning 5dB of padding will be required to bring it back to the 86dB level. That attenuation of the tweeter will work to our favour by reducing how hard it is driven, thus resulting in reduced distortion and increased power handling.

The drivers have been ordered. Much measurement, analysis and modelling will then be needed to design and appropriate enclosure and crossover for these drivers. To follow the discussion might require a brush up on relevant theory for which I’ll do my best to present in an understandable fashion in upcoming posts. You may choose to follow or maybe simply hang out for the final result of a completed design.

Loudspeaker System Design – Part 22013-03-122013-03-12/wp-content/uploads/2016/12/harbal-logo-lng_trans-drk-300px.pngHar-Bal | The Scientific Audio Mastering Solution/wp-content/uploads/2016/12/harbal-logo-lng_trans-drk-300px.png200px200px
Why buy Har-Bal?
You can immediately view the problem areas of your stereo files and Har-Balize the corrections. If you are serious about your mixes sounding their best, then Har-Bal should be a standard application used in your studio to test every song before final limiting (loudness) is applied. You can’t go wrong!
FAQ
Har-Bal Introduction
Copyright All Rights Reserved © 2017
Contact Us