Last time I posted on the crossover design I was hoping to be able to design the woofer-mid and mid-tweeter sections separately. As is most commonly the way with passive electronic filter design, that wasn’t possible because the phase shifts the woofer-mid crossover introduces affects the way in which the tweeter and mid range add together, meaning it must be taken into account to obtain a flattish response. Also, I failed to take into account the effect of the phase compensation network on the woofer-mid crossover, which will also change the phase relationships and ruin our previous attempt at the design.

Therefore the most appropriate way to deal with the problem is to deal with it as a complete system and optimise the crossover for a flat response. This we can again do with the nlminb() minimiser in R, all we need to is define an appropriate cost function to minimize.

As with the previous attempt at a crossover design for the woofer-mid region, the proposal is to have a first order high pass filter for the mid-range, which when combined with the response of the driver gives a nominally 3rd order acoustic response, and a complimentary 3rd order low pass section for the woofer. At the mid-tweeter crossover we propose having a third order low pass for the mid-range and a complimentary 3rd order high pass for the tweeter. These parts of the crossover all go into the cost function and parameters to optimise.

As mentioned in an earlier post, phase compensation applied to the mid-range is required to compensate for the phase reversal in the tweeter as we pass through the resonant frequency of the driver. We could apply it to the tweeter instead of the mid-range but we will need to use bipolar electrolytic capacitors here and I would rather not have those in tweeter signal path to keep it as clean as distortion free as possible. 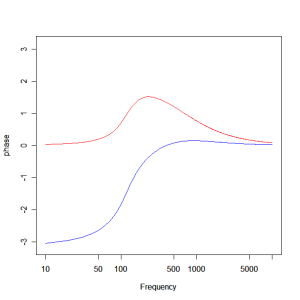 The phase compensation is achieved with a first order all-pass lattice network which is explained in the Wikipedia article found here. Remember the idea is to make the phase difference as near as possible to zero in the mid-tweeter crossover region (1kHz). This compensation achieves that down to a frequency of around 450Hz at which point it increases to a asymptotic phase lag of two pi radians. This should be good enough to ensure good crossover behaviour between the mid-range and tweeter. The components required in our case are an L of 3.05mH and a C of 82.1 uF assuming a load of 6.1 ohms (the voice coil resistance).

Using the optimiser to find the optimum crossover response and using a basic 3rd order Butterworth structure as the starting point, we find the responses shown below. The first zoomed in to the system pass band and the second showing the woofer roll off. The red plot shows the response of our starting point crossover and the green plot shows the optimised result. By running it through the optimiser we’ve taken a response deviation of +3.5, -1.2dB and reduced it to something more like +/- 0.1dB. All in all, a great improvement! 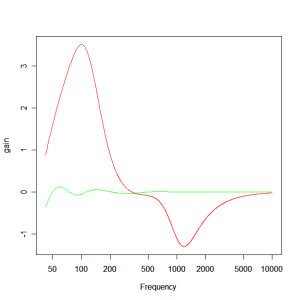 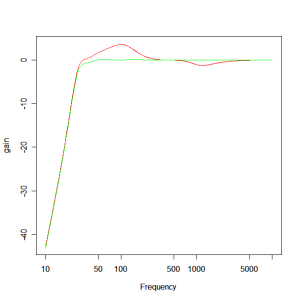 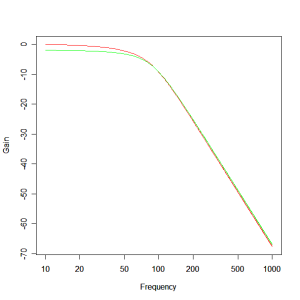 Note that there is significant deviation in the pass band which is due to the insertion loss of the filter owing to the high series resistance in the inductors. There is little that can be done about this without making the inductors impractically large and expensive. It’s just a fact of life that inductors operating at the low frequency end of the spectrum will generally have low Q’s leading to significant deviation from the ideal.

For the mid-range the comparison of ideal and actual is shown below. Here the agreement is much closer owing to the inductors operating at a higher frequency, thereby increasing the Q’s of the inductors (Q being the ratio of reactive to resistive impedance in the inductors). 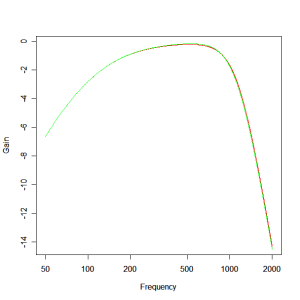 For the tweeter the comparison of ideal and actual is shown below. Again the agreement is pretty close though not as close as for the mid-range case. This is due to the sensitivity of the tweeter crossover filter (you can see it has a ringing second order pole pair by the peaking gain) to changes in component values. 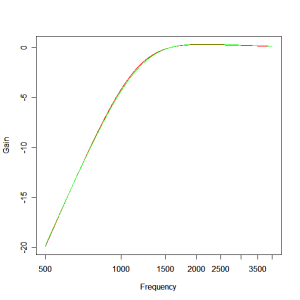 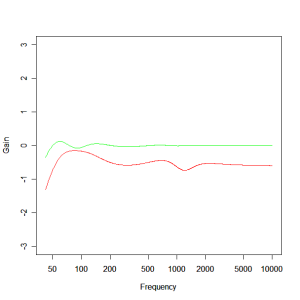 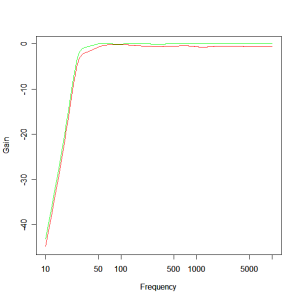 The complete crossover design is shown below. It certainly isn’t simple but the added complexity of this design should provide real gains in performance over a simpler structure. Half the crossover complexity simply stems from the required impedance equalisers for each driver. However, it isn’t really an optional component. When using high order crossovers, any reactive impedance in the filter load will create nasty peaking or notching responses in the actual crossover behaviour, so it is absolutely necessary to provide impedance equalisation for the drivers. 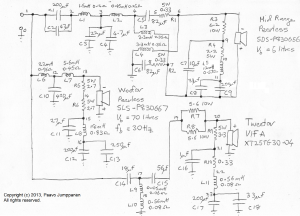 Components R5,R6,C11,C12,C13 and L8 form the impedance equaliser for the woofer. Remember from and earlier post that ideally this would have a second series resonator for the second peak in the driver impedance created by a bass-reflex enclosure, but we omit it because the components required for it are beyond what is available and too expensive to warrant the inclusion of it. L6,L7 and C10 form the actual 3rd order low pass filter for the woofer.

Components R9,R10,C16,C17,C18 and L11 form the impedance equaliser for the tweeter. R7 and R8 form an attenuator for the tweeter to bring its output in to line with the mid-range (the tweeter has a higher sensitivity than the other drivers). C14,C15,L9 and L10 form the actual 3rd order high pass filter. Note that you might think that we could do away with L9 and 0.56mH is pretty close to 0.61mH but owing to the sensitivity of the response to component values for that section, we must include it or otherwise include a significant deviation from the ideal response.

As a final check on the performance of the crossover we introduce an NGSPICE circuit simulation for it to validate it. NGSPICE is a commonly used (in electrical engineering) circuit simulation program that dates back to the 60’s. Fortunately there is an online version available here if you are willing to put up with the advertising it shows you, or like me, use a browser that disables that page javascript so you are blissfully unaware of it.

So how does it work? It’s pretty simple to use. All you need to do is to create a network description of the circuit, define the type of analysis and request the results. To define the circuit network you label all the nodes in the circuit diagram with numbers, then define the components as being connected from one node to another and its value. By custom, the 0 node is assumed to be ground. If you take a look at the circuit diagram above you’ll note that I have already labelled all the nodes. The SPICE network that represents this circuit is shown below.

It is necessary to define an AC voltage source : V1 between nodes 1 and 0. For all the inductors which have a series resistance associated with them I’ve added a node not marked on the schematic to include it in the simulation. For example,

Shows an inductor of 1.5mH and series resistance 0.14 ohm connecting node 2 to node 3 with the unmarked node being 29.

The other entry of note is the one that names the type of analysis we want SPICE to do which is,

This line say we want an AC analysis (small signal frequency response) with decadal frequency samples with 50 points per decade from 10Hz to 10kHz.  Then all that is required is to tell SPICE what you would like to plot. This we do with,

If you copy and paste the network into the first edit field and the plots above into the second one and press the “simulate and plot” button, NGSPICE will compute the response of the crossover and return the following graphs. 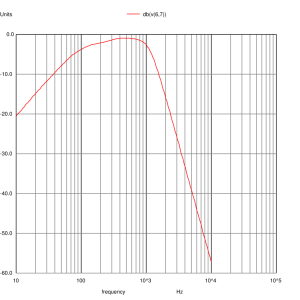 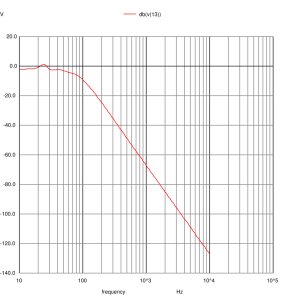 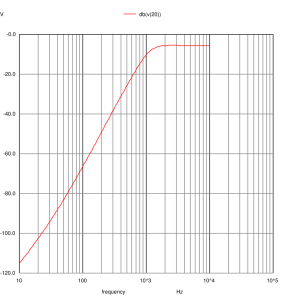 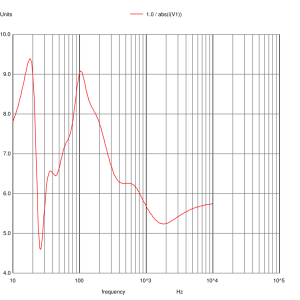 The mid-range and tweeter inputs look the way we expect them too. The woofer input shows a slight peaking at 24Hz due to the impedance peak that was not equalised. The woofer impedance is nominally 6 ohms and being bound between 9.5 and 4.5 ohms. Certainly not resistive but the loudspeaker shouldn’t present any problems to any amplifier and you shouldn’t need exceptional speaker cables to use them.

With our SPICE simulation it is relatively easy to demonstrate the effect of omitting the impedance equalisers or at least the LRC component. All we need do is replace the R component with a large resistance making it appear open circuit. If we do so the resulting responses are, 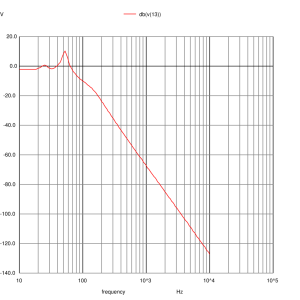 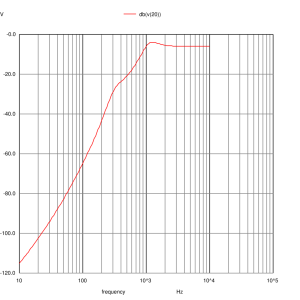 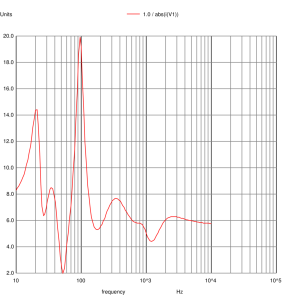 Looking at the responses the importance of the equalisers is patently clear. The responses exhibit unwanted peaking around the resonances of the drivers. The input impedance of the crossover is also more reactive than the case of with driver impedance equalisation.

As a final step we can integrate the SPICE simulation results back into our R model to obtain the modelled acoustic output of the loudspeaker system. If we do so we obtain the result below. The red plot shows the combined response, the green plot is the woofer output, the blue plot is the mid-range output and the orange plot the tweeter output. 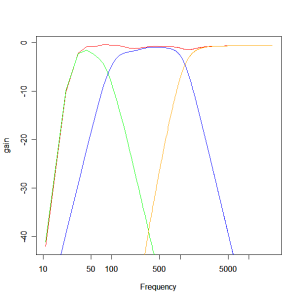 The response is not as flat as the simpler simulation and the difference most likely arises from the driver impedances not being perfectly equalised (perfect equalisation was assumed in the previous results). Even so, the response is within a 1dB envelope. It also extends to below 30Hz.

To determine system power handling we need to assume a shape for the typical power spectral density of the signals a loudspeaker will be driven by. For this I’ve assumed a basic pink noise power spectrum with a 2nd order (12 dB per octave) roll-off below 30Hz and a gentle 3dB per octave roll off above 2kHz. Then the electrical rating of the loudspeaker system can be determined by the manufacturers power rating and the theoretical power proportion delivered to each driver assuming the described signal power spectral density. As it turns out, the limiting factor on power handling is the mid-range unit because it carries the majority of the signal power. The theoretical electrical power handling is 121 Watts.

The resistor power ratings are determined by using the SPICE simulation results to determine the voltage across each resistor based on the assumed power spectral density of the input signal (with a power of 121 Watts). The power dissipated in the resistor is then that voltage squared divided by the resistance. Then the nearest power rated resistors are chosen for the crossover. This is indicated on the crossover schematic.

Loudspeaker System Design : The Complete Crossover2013-04-302013-04-30/wp-content/uploads/2016/12/harbal-logo-lng_trans-drk-300px.pngHar-Bal | The Scientific Audio Mastering Solution/wp-content/uploads/2016/12/harbal-logo-lng_trans-drk-300px.png200px200px
Why buy Har-Bal?
You can immediately view the problem areas of your stereo files and Har-Balize the corrections. If you are serious about your mixes sounding their best, then Har-Bal should be a standard application used in your studio to test every song before final limiting (loudness) is applied. You can’t go wrong!
FAQ
Har-Bal Introduction
Copyright All Rights Reserved © 2017
Contact Us