Designing the Cabinet for a loudspeaker system is less involved than some people might think. You basically have a limited set of constraints to work to and then the rest is a matter of personal style. The key constraints to the design process are the box volumes for the mid-range and the woofer, the height of the tweeter mid-range mid-line above the floor and avoiding simple integer ratios in box dimensions.

The importance of avoiding integer ratios in box dimensions is out of consideration of standing waves. Just as in room acoustics, a loudspeaker cabinet that has integer ratios of dimensions will exhibit strong internal standing wave behaviour which could have a major negative influence on the performance of the woofer and the mid-range unit for that matter.

The basic plans I came up with excluding details of the mid-range flange is shown below. 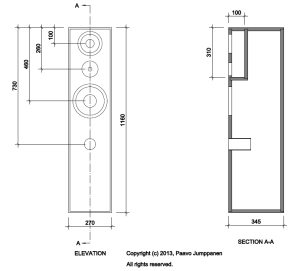 The tweeter is mounted 90cm above the floor and the mid-range and tweeter centres are 16cm apart giving the mid line height of 98cm. The internal dimensions of the woofer enclosure (ignoring the mid range box for now and assuming a 2cm MDF thickness) are 23cm width, 30.5cm deep and 112cm tall. That gives a depth on width ratio of 1.326, a height on width ratio of 4.870 and a height on depth ratio of 3.672. None are simple ratios as required.

The drivers themselves are then mounted as close as practically possible to one another. In this regard, cursory inspection of the plans might suggest that the tweeter could be closer to the mid-range, however, you need to consider that the mid-range unit will be set forward of the tweeter by a flange and we need to allow some extra space to place the flange cusp that we need to avoid excessive colouration of the tweeter response. The woofer position is not so sensitive and doesn’t affect the response that much but we should leave some space between the driver port and box walls to avoid introducing asymmetrical air mass loading on the cone, which in turn my lead to increased distortion. We should also avoid mount the woofer too close to the floor as this will result in a substantial lift in bass coupling with the room which in turn make our speakers sound muddy. The vent should also not be too close to the floor nor too close to the woofer to again avoid too much asymmetry in air mass loading on the woofer.

The internal dimensions of the mid-range enclosure are 23cm width, 29cm height, 8cm depth giving a width on depth ratio of 2.875, a height on depth ratio of 3.625 and a height on width ratio of 1.261. Again, none are simple ratios. The box volume is 23×29×8=5336 cubic centimetres or 5.336 litres. Our design was for 5 litres but a portion of the box volume with be taken up by the volume the drivers displace and the volume displaced by the box stuffing. 0.36 seems like a reasonable guestimate of these displacements and in any case, the driver response is not very sensitive to changes in box volume so any small errors should have minimal impact on the final result.

The woofer enclosure volume is (23×30.5×112)-(23×31×10)=71438 cubic centimetres or 71.438 litres. Our design goal was a figure of 70 litres and the 1.438 extra litres is a reasonable allowance for the volume displaced by the driver, the vent, the crossover and the box stuffing. Again, the design is not very sensitive to changes in box volume so any error should have a minimal effect. The major effect would be on box tuning but this will be tuned correctly through measuring the impedance of the woofer mounted in the cabinet and adjusting the vent length until the impedance shows the correct box frequency.

That is the basic cabinet design. You could make it more elaborate by using angled walls to further reduce standing wave issues and a more sculptured look for aesthetic reasons. It all comes down to how much effort / cost you can justify. More elaborate designs add a little bit of extra performance but generally require considerably more effort to construct so I’ve stuck with something simple.

Loudspeaker System Design : The Cabinet2013-05-132013-05-13/wp-content/uploads/2016/12/harbal-logo-lng_trans-drk-300px.pngHar-Bal | The Scientific Audio Mastering Solution/wp-content/uploads/2016/12/harbal-logo-lng_trans-drk-300px.png200px200px
Why buy Har-Bal?
You can immediately view the problem areas of your stereo files and Har-Balize the corrections. If you are serious about your mixes sounding their best, then Har-Bal should be a standard application used in your studio to test every song before final limiting (loudness) is applied. You can’t go wrong!
FAQ
Har-Bal Introduction
Copyright All Rights Reserved © 2017
Contact Us