The elaborate processes I’ve used in designing this loudspeaker system counts for nothing if not realised in a concrete form. Out of extreme curiousity as to whether this labour will pay any dividends, I worked frantically last weekend to build a box (less finishing details such as veneer and the like), then a late evening to assemble the drivers and crossovers into this one prototype so I could hear how it might perform.

Having only one meant listening to it when paired up with my previous design which fortuitously has about the same sensitivity. This gives rise to a rather skewed stereo image because their response differ but it does actually give a pretty clear assessment of how they compare one against the other.

At the outset it is clear my new design gazumps my long held previous speakers which I’ve loved for too many years. In fact, I loved them so much so that I never really felt compelled to get something better and really only took on this project as something to write about, but I’m not disappointed in my foray. The sound eminating from this design is entirely neutral, not having a colour of its own, but truly reflecting the colour of the recorded material, as it should. In contrast, my previous design has a mellow warm tone that verges on muddy with bass heavy material.

The thing that did concern me was having an excess of top end as I know from experience that too much tends to take all the depth perception out of sound reproduction, giving rise to something that is sharp and clear but one dimensional, however, this doesn’t happen and they reproduce depth well. The hemisphere of sound on the right side (the side my new design is currently sitting) sounds more detailed and space filling than what I hear on the left. The bass is also truly extended but controlled so although it is there down to 27 Hz it doesn’t try to dominate so the box design sounds essentially correct.

From a listening point of view I’m already sold on it but I did a few checks on the measured response to confirm to myself that I’m not imaging it and to perhaps figure out why they sound as good as they do. Below is a set of measure responses measured at a distance of around 50cm from the tweeter in my listening room at various angles off the central axis. You should ignore anything in the response below 20Hz as that will be inaccurate and the large peaks and troughs in the 20Hz-200Hz region are standing wave issues in my room, not the speaker response itself. 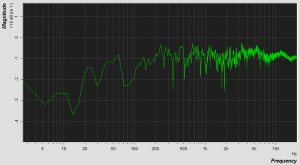 The on axis response looks remarkably flat and extends down to the 27Hz region predicted by the modelling. There is no obvious problems with the mid-tweeter crossover point. 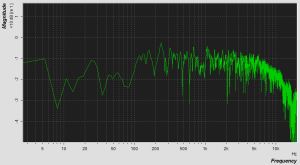 New Design Response : +45 degrees off tweeter axis at 50cm in the vertical plane

In the vertical plane at 45 degrees off axis (above the tweeter moving toward the ceiling) the response is similarly very uniform apart from the expected drop in sensitivity at the high frequency end. You would be hard pressed to pick a crossover point from the response. 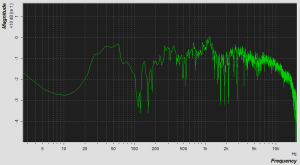 New Design Response : -45 degrees off tweeter axis at 50cm in the vertical plane

In the vertical plane at -45 degrees off axis (below the tweeter moving toward the floor) the response isn’t so good, which is what modelling predicted, though it holds up reasonably well. The big dip at 150Hz is a standing wave issue and not a crossover issue. 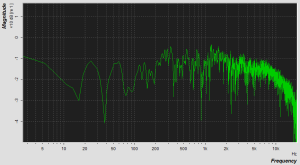 New Design Response : +45 degrees off tweeter axis at 50cm in the horizontal plane

In the horizontal plane at 45 degrees off axis the response is almost as good as in the first vertical plane case, showing some peaking at 300Hz and 1.5kHz but again is pretty uniform and well behaved. All in all, it goes very close to behaving like a single driver rather than the three drivers it is composed of.

Now compare this to my old speakers to get a quality comparison. The on axis case is pretty uniform though you can see the origin of the warm sound in this design from the drooping top end. I adjusted the tweeter attenuation to taste and I think there are two reasons for it’s subdued nature, one being the resonance in the tweeter at 12kHz which makes it cut through quite a lot so I always found a flatter adjustment sounded too bright. The second issue is that the bass extends only to 40Hz and not the 27Hz of the new design. This meant that the flatter I’d made the top end the lighter the bass sounded and I preferred the bass cutting through a little more, even though it came at the expense of some tendency to muddiness. 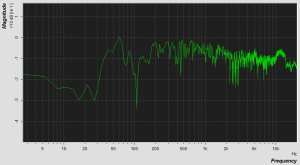 Moving off axis we see problems creep in and out. There is definite mid-range weakness in the 1-3kHz region +45 degrees off axis in the vertical plane. 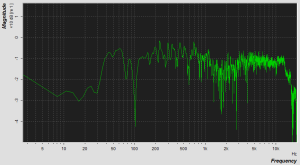 Old Design Response : +45 degrees off tweeter axis at 50cm in the vertical plane

In the other direction the story is much the same though possibly more so. 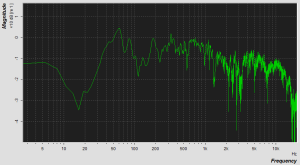 Old Design Response : -45 degrees off tweeter axis at 50cm in the vertical plane

In the horizontal plane the off axis response holds up better though there is some weakness around 4kHz. 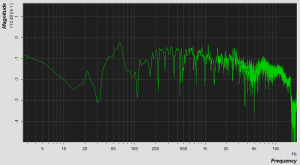 Old Design Response : +45 degrees off tweeter axis at 50cm in the horizontal plane

Overall, it is clear that the difference in sound quality is not just down to the deliberately subdued response of my old design but also due to the less accomplished off axis response. It is not surprising that they should be inferior. There are multiple reasons. Firstly, the crossover frequency is 2kHz and not 1kHz meaning the effective driver separation is greater (because it is the separation in terms of wavelengths that counts) in the old design, secondly, I made no attempt to time align the tweeter and mid-range, and thirdly, the crossover was essentially hand optimised and not optimised through numerical minimisation as was here. The crossover is simpler too, omitting the phase equalisation stage that is included in this new design.

This brings me to one final point about the design. The crossover design used in the final prototype differs from the one I originally published by the amount of padding applied to the tweeter. Using the padding in the original plans gave rise to a response way too bright.

The strange thing is that the padding was based on manufacturer supplied driver sensitivities so you would have though it should be close but I used about 6 dB more attenuation in the above as I had in the original design. Stranger too is the fact that I had the exact same issue in building my previous speaker system whereby building the crossover based on manufacturer supplied sensitivities led to a response way too bright. Why this is is still a mystery to me. You certainly can’t explain it through insertion loss from the crossovers as that figure is more like 1 dB and not 6 dB.

So if you ever attempt to design your own speaker system my advise to you is to base driver padding on what you hear and not what the manufacturers specs suggest.

Loudspeaker System Design : The Moment of Truth2013-05-242013-05-24/wp-content/uploads/2016/12/harbal-logo-lng_trans-drk-300px.pngHar-Bal | The Scientific Audio Mastering Solution/wp-content/uploads/2016/12/harbal-logo-lng_trans-drk-300px.png200px200px
Why buy Har-Bal?
You can immediately view the problem areas of your stereo files and Har-Balize the corrections. If you are serious about your mixes sounding their best, then Har-Bal should be a standard application used in your studio to test every song before final limiting (loudness) is applied. You can’t go wrong!
FAQ
Har-Bal Introduction
Copyright All Rights Reserved © 2017
Contact Us