The MDF cabinets will have a real timber veneer applied to it. Actually, I’ve already done one cabinet.

Application of the veneer is a tedious and time consuming business requiring careful application of the veneer with contact adhesive and then trimming to the cabinet size. This was made worse for me by the choice of one of the veneers (iron wood) which although attractive, is very hard and brittle, so not easily trimmed to fit without splitting it. As such the side panels, which are mostly covered with iron wood are only covered to within about 5 mm of the edges so that I did not need to trim it, but it meant adding an extra thin piece on either side to take it to the edge, using a different timber that is more forgiving to trimming. The final finished and vanished cabinet is show below.

The crossover boards are mounted on the inside rear panel. 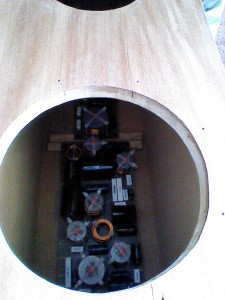 All assembled the cabinet looks quite attractive. Note the flange setting the mid-range forward to time align it with the tweeter. The speaker sitting next to it is my previous model I built back in the 90’s. 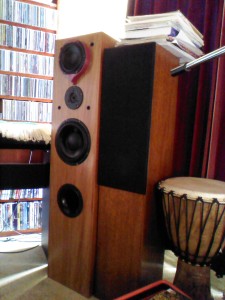 Now compare it to the look of the yet to be finished prototype. Clearly far less attractive, but it has taken the best part of 7 days work to do the finishing work so I have plenty of labour still to come before I have a matching pair. 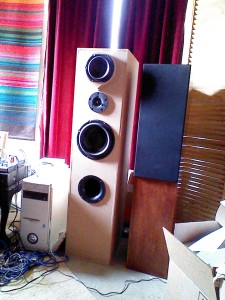 Although I had a tasting of what was to come when listening to my prototype as a single speaker along side one of my old ones, how they would sound as a pair was hard to envisage. Now that I have a working pair I don’t need to guess.

The sound is truly sublime. Imagine is accurate and it is really difficult to fix on a “problem” in the sound. There just doesn’t seem to be any obvious audible weaknesses in the sound. Likewise, there is absolutely no sense of crossover point weakness that I can hear in my old design and in other loudspeakers I had a chance to listen to. The sound is, in short, very accurate.

Highs are crystal clear but not overblown, mids are sharp and well defined, bass is extended and punchy and it all sounds cohesive as a whole. Listening to quality classical recordings it is easy to forget the speakers and become totally immersed in the performance, which comes across with all the warmth and detail of a live performance. The bass extension is so good that it disturbingly shows up recorded sub-sonic noises that probably shouldn’t be in there (eg. wobbling mic stands) and when it is intended it is shuddering without loss of control.

In fact, if I were to give praise for any one thing it is the low mid  and bass reproduction which is seemless. So often big bass speakers have oomph but no tight punch, or conversely, plenty of punch but no oomph. This system has both. Perhaps most importantly, the reproduction of human voice is astonishingly clear, with a definition I don’t think I’ve ever experienced before, except in the case of the real thing.

All in all, they are a pleasure to listen to and well worth the effort of design and construction! Certainly, I think I can say with absolute certainty that anyone who has the courage to build this design won’t be disappointed with the sound quality that will result. Although not cheap (mine will have cost me around $1200 to build), I very much doubt you could find a comparable performance in a bought system for less than $4000 and that is probably conservative.

A final point on the measured responses in my previous post : the hole in the response around 100Hz is not a standing wave issue but a “constructor incompetence” issue. I wired the woofer up in the wrong phase which resulted in the notching. With the correct phasing the hole disappears and the response is nominally flat (excepting the peaks and troughs resulting from room reflections). When I have time I’ll re-do the results to show the real response of the system. I’ll also bundle together a bill of materials and all the design drawings needed to contruct the loudspeaker system. It may take a while though as I’ll be distracted by the sound of my new speakers, which I haven’t even finished yet!

Loudspeaker System Design – Completion and Listening Evaluation2013-06-252013-06-25/wp-content/uploads/2016/12/harbal-logo-lng_trans-drk-300px.pngHar-Bal | The Scientific Audio Mastering Solution/wp-content/uploads/2016/12/harbal-logo-lng_trans-drk-300px.png200px200px
Why buy Har-Bal?
You can immediately view the problem areas of your stereo files and Har-Balize the corrections. If you are serious about your mixes sounding their best, then Har-Bal should be a standard application used in your studio to test every song before final limiting (loudness) is applied. You can’t go wrong!
FAQ
Har-Bal Introduction
Copyright All Rights Reserved © 2017
Contact Us