In my previous frequency response measurements posted for the unfinished prototypes I inadvertently had the woofer wired in the wrong phase leading to a deep notch in the crossover point between the woofer and mid-range drivers. Having now fully completed both loudspeakers and rectified the wiring error I thought it appropriate to post a new set of performances plots to reflect the true nature of the loudspeaker design.

Starting with the near field on tweeter-mid range mid line frequency response we see a nominally flat response with no easily discernible crossover region problems. The notching at 120Hz in the previous test is not present here. 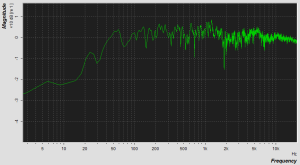 At 45 degrees off mid-line in the horizontal plane the response also shows good crossover behaviour with the expected drooping response at the high frequency end due to the polar response of the tweeter. 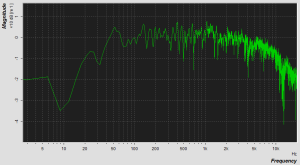 At +45 degrees off mid-line in the vertical plane there is a peaking around 1kHz and some dipping in the 2-3kHz region which is largely consistent with modeling. 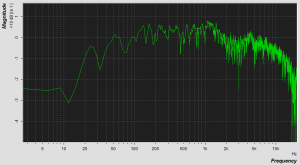 Similarly, at -45 degrees off mid-line in the vertical plane there is notching around 1kHz which is also largely consistent with modeling. 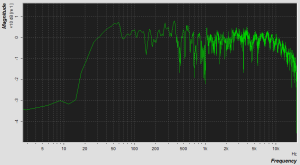 Moving further afield, the response of the left channel in my normal listening position is nominally flat from around 20Hz to 20kHz with some deep notching in the 30Hz to 200Hz region. These notches are a result of the standing wave patterns in my listening room which is, by typical monitoring standards, an acoustically small room. It is pentagonal in shape with a side length of around 2.7m so is a very modest room size, hence the problem with low frequency standing waves. 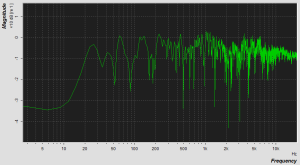 For the right channel the result is similar though the notching at the 30Hz to 200Hz region is distinctly different suggesting that my room is not acoustically symmetrical or at least my speaker placement. However, in both cases it is pretty clear that the response extends down to 27Hz as the design figure suggested. 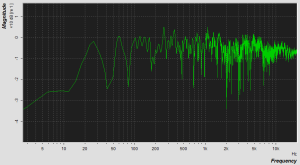 Going slightly further afield to a position just behind my listening position we see the bass lift in both left and right channel responses owing to the microphone moving into the sphere of influence of the room modes (ie. closer to the wall) whereas my listening position is close to the mode anti-node, hence the deep notching and controlled bass output. 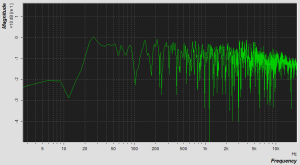 Here we see that the influence of the room extends the useful bass output right down to 20Hz making it clear that it covers the normally accepted complete audio spectrum. No need for sub-woofers here! 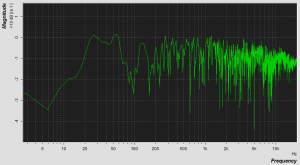 Finally, I’ve noted on many occasions through my normal breakfast and dinner preparation listening that takes place in my adjacent open plan kitchen, that the sound I hear there is remarkably clear and uniform despite not being in any way optimal as far as listening positions go and significantly clearer than with my previous loudspeakers. In fact the sound simply propagates through the open doorway to my normal monitoring room so you would hardly expect high fidelity but to confirm the impression I did some measurements of the sound picked up in that room without a direct line of sight to the loudspeakers. The results speaker for themselves showing a response that is essentially nominally flat from 20Hz up to around 7-8KHz where upon it begins drooping off! Quite an impressive result I thought and perhaps a vindication to the design approach and the attention played to the vertical polar response. 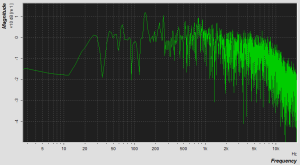 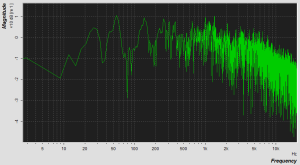 In conclusion, I think it is clear that this design works incredibly well and is worthy of monitor status. Certainly it is more than adequate for my needs and probably out performs speakers costing much much more. The only real issue I have to now deal with is the problem of deep notching caused by the standing waves in my acoustically very small room. This too, I believe I have a solution for in the form of echo cancellation equalisation techniques but I’ve yet to implement the algorithm to design the EQ or purchased the DSP hardware to implement the EQ in, though I have done some rudimentary tests using a DAW to verify that it is at least technically possible but that is another project for another time.

Loudspeaker System Design – More Performance Measurements2013-08-062013-08-06/wp-content/uploads/2016/12/harbal-logo-lng_trans-drk-300px.pngHar-Bal | The Scientific Audio Mastering Solution/wp-content/uploads/2016/12/harbal-logo-lng_trans-drk-300px.png200px200px
Why buy Har-Bal?
You can immediately view the problem areas of your stereo files and Har-Balize the corrections. If you are serious about your mixes sounding their best, then Har-Bal should be a standard application used in your studio to test every song before final limiting (loudness) is applied. You can’t go wrong!
FAQ
Har-Bal Introduction
Copyright All Rights Reserved © 2017
Contact Us