Har-Bal™ is a New and Novel Approach to an existing problem.

What is Loudness Compensation Technology?

When you perform EQ on a typical equalizer or mixing desk you cannot make an impartial judgment about whether a particular EQ setting is good or not because it is generally not loudness compensated. By that we mean for an A/B test of with and without EQ to be unbiased, the perceived loudness of each case must be the same! If you boost the midrange on your EQ you will have boosted the overall loudness so any in/out test will be biased toward your boosted case simply because it is louder. The only way you can do this on a mixing desk is to cut the output level on the EQ’d case but by how much will you cut it?

Without compensating for loudness it is very easy to make EQ mistakes. With the approach Har-Bal takes it is much less likely.

So why is Har-Bal better than conventional approaches?

To answer this question let’s reflect upon and define conventional approaches. The current practice for mastering of popular music will typically involve a combination of processes including mix-down, dynamic range compression, equalization and normalization or limiting. Har-Bal principally addresses the issue of equalization in a newer way. After the mix-down the final mix will more often than not have some level of dynamic range compression applied to it, either through a conventional compressor or a multi-band compressor like that available in the Finalizer. After compression some degree of equalization may be needed to compensate for the shift in spectral balance that compression often causes, or worse still, to compensate for a poor mix-down. Either way, this is achieved by a studio engineer of varying skill adjusting the controls on a graphic, or more commonly a parametric, equalizer while monitoring the resultant sound through speakers to obtain the desired effect.

What is Harmonic Balancing?

It is pretty well documented that prolonged periods of listening to improperly mastered recordings usually leads to hearing fatigue that ultimately takes the pleasure out of the listening experience. Harmonic Balancing provides a reliable means of correcting and removing the tonal imbalances inherent in any song, thus producing a more naturally pleasing and agreeable sound to the listening ears. Users of the software report that this new process has demonstrated itself time after time in producing a harmonically balanced sound from one that was wanting. When a song is harmonically balanced they state that the effect can be phenomenal. The goal of Har-Bal is to correct existing frequencies that are in conflict with the natural sound spectrum.

"You Won't Believe Your Ears"

The entire process of mastering is heavily reliant upon the skills of the engineer. In particular, the degree to which he or she can judge the music and its deficiencies, or in other words, how well he or she can analyze the recording through listening. Even for the most proficient of operators this task can be particularly difficult to do well and this in turn is a result of the way in which we perceive sound. Factors such as masking, poor monitoring acoustics, and poor speakers play a significant part but most importantly the issue of human loudness perception makes the task very difficult to do well. Of course this wouldn’t be an issue if we all had unlimited funds. An FIR Digital EQ Designed Expressly for Mastering, with a Musician-Friendly Interface. 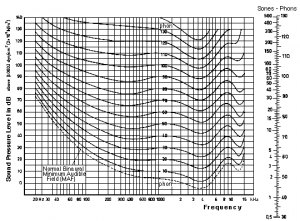 Figure 1: Equal loudness contours for human hearing subject to pure tones in a free-field with the subject facing the source (from ISO recommendation R226).

At low volumes we find it hard to hear low and high frequencies but as the volume increases the spectrum extremes become progressively easier to hear as is illustrated in the equal loudness contours for human hearing shown in Figure 1. So much so that you might find that if you were to simply turn up the volume you may find that your mix sounds significantly better. So when you combine the effect of loudness sensitivity and equalization changes, how do you tell how much of the improvement was due to the equalization and how much was due to the overall increase in perceived loudness? For example, you might raise the mid-range by 6dB because it sounds better but do you know if this improvement is actually due to the equalization or just merely the fact that the effective loudness has increased by something less than 6dB? To accurately judge a process that involves changes in spectral balance requires that you account for the change in effective loudness. In the above example, to accurately judge the effect of the EQ change would require that you reduce the overall volume while boosting the mid-range but by how much?

So how does Har-Bal balancing handle this problem?

Har-Bal is essentially composed of two parts : a spectrum analysis engine and a high-resolution linear phase digital filter. We handle the problem by first analyzing the entire recording. This gives us a measure of the average and peak spectrum content (displayed graphically) from which we can quickly and easily judge the spectral balance of a given recording. Then through a novel user interface, our software allows you to design a matching digital filter that produces the spectral balance that you want and without question. The designed filter can be tested by listening to the effect it has on the recording and comparing it with the un-balanced version in real time.

How is this different from the conventional approach? 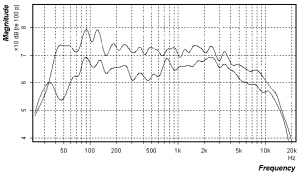 Figure 2: Measured spectrums for a poorly mastered track overlaid on a good one, as measured by Har-Bal. The poor recording sounds thin and sparse. Can you guess which one is which?

Firstly, you do not need golden ears to judge where the problem areas of a particular recording lie as the spectrum measurement gives you an accurate indication of this. If you find this hard to believe try this for a challenge. Find what you believe to be your best sounding CD and your worst sounding CD and analyze each in turn. You will find the differences obvious. Figure 2 is a illustrative case in point of two recordings in the same genre but with vastly differing listenability. Can you see why? With experience you will come to a better understanding of the relationship between a particular spectral shape and the overall sound quality.

Secondly, a typical equalization filter, like those found in other systems, will have only a limited degree of flexibility (i.e. limited boost & cut, Q etc.) and are unlikely to be linear phase filters. Har-Bal, on the other hand, uses an 8192 point linear phase FIR filter whose characteristics are designed to match and compensate for the average spectrum as closely as possible and the degree to which you can boost and cut a particular region is essentially unlimited. 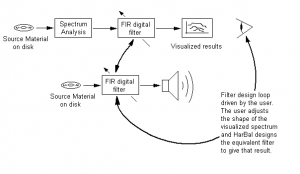 Figure 3: Schematic representation of the functioning of Har-Bal.

Finally, following on from the discussion of loudness, harmonic balancing attempts to compensate for the effect of changing apparent loudness that results from filtering. Har-Bal does so by measuring a loudness figure for the original recording (based on an A-weighted sound power) and adjusting the volume control on the filtered version so that the loudness figure of merit after filtering is the same as for the original. In this way the you can be sure that the differences you hear are due to the change in spectral balance and not the change in volume. A simplified view of the processes which Har-Bal utilizes in performing Harmonic Balancing is shown in Figure 3. Notably missing from this view is the process of loudness compensation, which has been overlooked for the sake of clarity.

By coupling spectrum analysis with linear phase digital filtering Har-Bal provides the most powerful, yet functionally simple means of re-adjusting the spectral balance of sound recordings, be they original new masters, or re-masters of existing works.

Why buy Har-Bal?
You can immediately view the problem areas of your stereo files and Har-Balize the corrections. If you are serious about your mixes sounding their best, then Har-Bal should be a standard application used in your studio to test every song before final limiting (loudness) is applied. You can’t go wrong!
FAQ
Har-Bal Introduction
Copyright All Rights Reserved © 2017
Contact Us